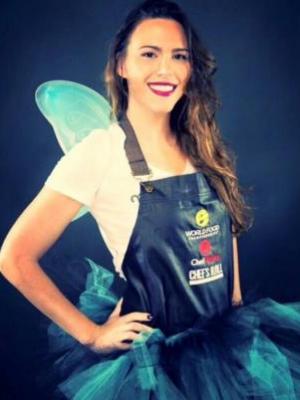 
Chicago Confectionist Jennifer Cox, who is widely known in the culinary industry as the sprightly glitter-winged "Marshmallow Fairy" will be competing for her 3rd straight year in the Dessert Category at the 2016 World Food Championships. A seasoned talent with extensive experience in the competition arena, this Fairy will no doubt bring some fierce fairy flare in her tutu along with enchanting yet familiar dessert favorites to this years Kenmore Kitchen Stadium . Having placed Top 10 *twice in the Dessert category for 2014 and 2015 at the WFC, along with taking 1st place in the Chicago Culinary Fight Club "small bites" throw-down which automatically qualified her for this years competition in Orange Beach, AL. Chef Cox, "The Marshmallow Fairy, is a self-trained culinary artist who owns an online boutique business which specializes in customized desserts, candies and event catering.