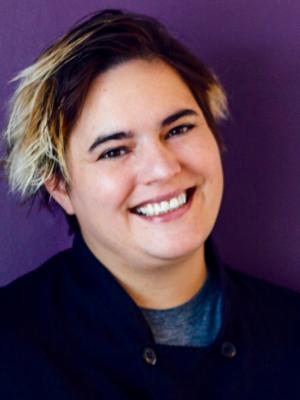 
Chef Alexa Lemley grew up in a restaurant and catering family, spending her youth learning from her chef parents in their businesses. As Executive Chef of Lemleys' Catering, she continued the family tradition of food innovation. In 2014, she started 240sweet and Artisan Foodworks with her wife, Samantha to provide catering and confections. This year, she expands her love of food and drink as the master distiller of Little Pot Spirits. • Winner IndyCooks for the ARC 2016 for Smoked Maple Leaf Farms Duckballs. • Winner “Best Brew” at the Madison Soup Stew and Brew 2016. • Winner “Best Overall” and “Best Sweet Dish” at the Chicago Bacon and Beer Classic 2016. • Recipient of the 2016 James Beard Foundation Rhone Rangers Grant. • Finalist in the Chef’s Taste Challenge Farm to Table Cook-Off held in New Orleans in August 2016. Also declared to be one of the “Top 10 Farm to Table Chefs in the USA). • Winner “Best Sweet Dish” at the New York City Bacon and Beer Classic 2016. • Overall Champion Denver Bacon and Beer Classic (now on to compete in World Food Championships 2016) • 240sweet LLC certified as LGBTBE in March 2016. • Artisan Foodworks named #3 of Top 5 Dinner Party Caterers by Indianapolis Monthly in December 2015. • Grand Champion in the American Dairy Association Indiana Ultimate Macaroni and Cheese Cook-Off 2015. • Winner of “Most Creative” and “Best Gluten Free” for Popcorn and Lobster Soup at Indiana Soupfest 2015. • Recognized by “Go Magazine” in 2011 and 2014 for being “hot” and outstanding woman entrepreneur. • “Local Food Hero” Best Chef 2013 and Best Food Artisan 2012 and 2013 by Edible Indy Magazine. • Received the Hoosier Hospitality Award 2013 by Indiana’s Lt Governor. • Awarded the designation of “20 under 40” by Columbus Young Professionals in 2011. • Inducted into Indiana Artisan in 2008 in recognition of the superior craftsmanship of our 240sweet marshmallows.