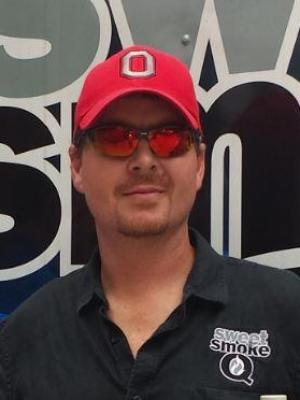 
Jim Elser, of Sweet Smoke Q, is one of the hottest names on the championship BBQ circuit. This small farm-town guy who works for as an engineer for a bowling company is now being recognized around the world due to his recent BBQ competition success. Jim’s originally from a small farm town in Ohio, but now resides in Winter Haven, FL. His accomplishments have also drawn attention to his line of specialty consumer products as well as his BBQ classes where the secrets of this Pitmaster are shared with cooks of all levels. Jim is the current 2014 BBQ World Food Champion, 2014 Florida BBQ Association Team of the Year, 2015 and 2013 Florida BBQ Association Team of the Year runner‐up. In just the past three years he has also won some other impressive titles including: 13 Grand Champions, 15 Reserve Grand Champions, and multiple top five overalls.