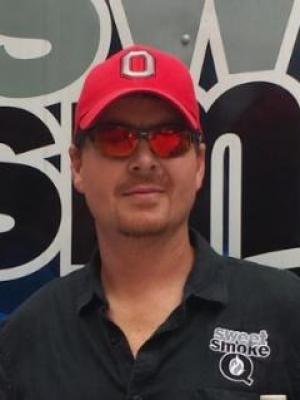 QUALIFYING EVENT: Smoke on the Water


My name is Jim Elser, and I am the Pitmaster for Sweet Smoke Q out of Winter Haven, FL. Sweet Smoke Q is a competition BBQ team made up of my teenage son Garrett and myself. We have been competing since the beginning of 2010. I also have started bottling our own line of sauces, rubs and the very popular "JUICE" injections, which are becoming a huge hit on the competition circuit. We also build and sell the JUICE Can Drum Smoker and working on a new prototype smoker to be unveiled later this year.. 2013 Florida Barbecue Association Team of the Year Runner Up. 2013 FBA Team of the Year in the Chicken, Ribs, and Pork categories. 2014 has started off with a bang and is beginning to look brighter as Sweet Smoke Q has already taken home two back to back Grand Championships in Ft. Pierce, Florida and Zephyrhills, Florida in January and again in Thomaston, Georgia at the Georgia State Championship and Tavares, Florida in April. We recently won the 2014 FBA Team of the Year in points. Our calendar at the moment sits at thirty-five contests planned for 2014. Out of 25 contests so far in 2014, Sweet Smoke Q managed: • 5 Grand Championships • 3 Reserve Grand Championships • 7 top five overall • 8 top ten overall • 9 category wins • 38category top five • 23 category top ten