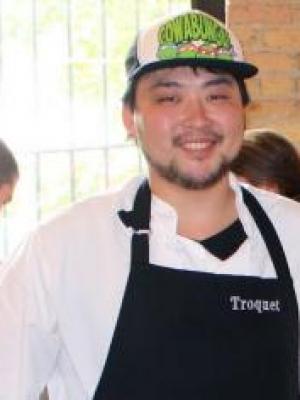 
I was born in South Korea and adopted when I was thirteen months old. I lived in the northwest suburbs of Chicago most my life. I’ve lived in downtown Chicago for the last five years. I currently reside in Edgewater, I love the neighborhood. I attended Kendall College here in Chicago for two years and learned the basics of French cuisine. I’ve been with the LM Restaurant Group for about five years and have been the chef at Troquet River North for almost two years. We do French inspired bar food with a twist. I did my internship at One Sixty Blue under Michael McDonald (ZED 451, Chicago). At LM Bistro, my first job, I worked under Bradford Phillips (Guildhall, Glencoe), Justin Perdue (Liberte Lounge, Philadelphia) and Tanya Baker (The Boarding House, Chicago). I also was the Sous Chef at the original Troquet in Ravenswood and Sous Chef at Brasserie 54 (currently The Brixton in Andersonville).