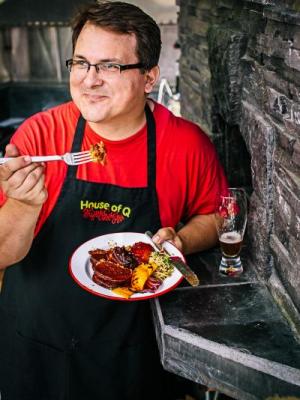 
2014 World Food Championships - First Place Ribs! National Best Selling Author - Grilling with House of Q BBQ Brian Misko is a Pitmaster and a storyteller, and he’s one of the best. Since leaving behind a job in the software industry to cook competitively, he and his House of Q team have been crowned Grand Champion at many barbecue competitions. In 2014 alone, he has earned the inaugural Canadian BBQ Society national Team of the Year, been crowned twice Grand Champion, and been selected to represent Canada at the Jack Daniels World Championship Invitational Barbecue. A career highlight is winning first place ribs at the 2014 World Food Championships. BBQ Brian’s new cookbook titled Grilling with House of Q is gathering rave reviews and fans meanwhile educating cooking enthusiasts on how to be creative at grill. BBQ Brian can be seen providing “BBQ Tips” on Global BC’s Morning News, giving demos on trade show stages, and developing new products for his House of Q line of BBQ sauces and rubs. He lives in Surrey, B.C., with his family and a large collection of grills and smokers. "House of Q" is a registered trademark.