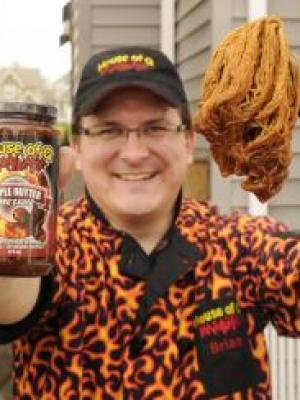 QUALIFYING EVENT: BBQ on the Bow


WINNER: FIRST PLACE RIBS IN BBQ QUALIFYING ROUND House of Q is an award-winning competition BBQ team based in Surrey, B.C. Since starting to cook competitively in 2005, the team has accumulated awards locally and across North America. House of Q attended the Jack Daniel’s World Championship Invitational Barbecue in Lynchburg, Tennessee, in 2009 and twice has gone to the Best of the Best Competition at the National BBQ Festival in Douglas, Georgia. In 2014, the team was honoured as the Team of the Year for Canada. BBQ Brian was a guest chef at the Vancouver 2010 Winter Olympics. BBQ Brian’s first cookbook titled Grilling with House of Q will be released in the spring of 2015 across the US and Canada. House of Q launched its BBQ sauce and spice line in 2007, and its signature Apple Butter BBQ Sauce has won awards including third-best barbecue sauce in North America at the National BBQ Festival in Douglas, Georgia. In 2012 and 2013, the Slow Smoke Gold BBQ Sauce and Slather was awarded second-best sauce at the American Royal World Series of Barbecue in Kansas City. House of Q products have a loyal following and are bestsellers at speciality retailers across the country.