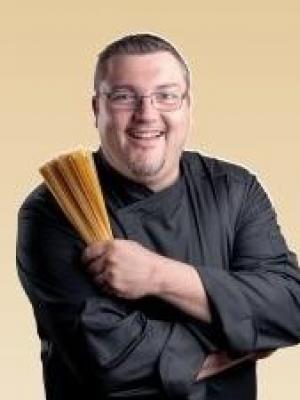 
Adrien is French, a finalist in the most recent Masterchef adventure (Masterchef 4). An Inventor and also an entrepreneur, Adrien is passionate about cooking. He is very much in love with the south west of France. He attaches great importance to the choice of the products he uses. Adrien represents an authentic cuisine, personal and convivial with gourmand and sun-filled recipes. A subtle alliance between Italian cuisine and excellent local products. Friendly and fun-loving, he is a true representation of the sharing values held dear by his region and country. At the age of 42, he currently lives in Puymirol in the Aquitaine region, in the lot-et-garonne department renown for it’s great Michelin starred chef Michel TRAMA (elected Chef des Chefs in 2004, he wrote the preface to Adrien’s book Pasta & Co). As a person Adrien is fun-loving, a one man party, he is also generous, ambitious and determined with a genuine love of life. He also has his faults namely being impatient, gourmand (he tops the scales at nearly 300 pounds ! lol) and fearless. His profound love of cuisine began at a very young age, his father introduced him to Italian cuisine and his mother to home- made tasty dishes. He credits his mother with encouraging him to apply the FFY (Fend for yourself!) approach in cuisine. Consequently he grew up learning to develop his own senses of taste and smell, always trying to find the best taste alliances. “In the Aquitaine region I have a very wide choice! Lots of good products, full of flavor, like my region”. Creator of a new line of Pasta in his name and Maitre Pastier of France, he has enriched this line with an equally exciting range of Risotto, Foie Gras and Vintage Italian Olive Oil, he has also created a Food Truck concept named “Pronto Al Gusto” meaning “Ready to eat/enjoy”. “My speciality : Pasta ! And sauces which secret ingredients were shared with me by my grandmother”. Adrien Pedrazzi is also working on a TV programme “Adrien’s Gourmand Strolls” scheduled to be broadcast in the first semester of 2015 in France.