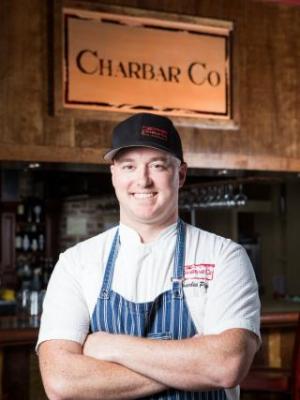 
CharBar Co.’s thirty-year-old Executive Chef Charles Pejeau attended the Florida Culinary Institute and honed his culinary skills at prestigious restaurants in South Florida, Robert Irvine’s E.A.T. on Hilton Head Island, South Carolina and the award-winning Inn at Palmetto Bluff which was ranked #1 in the United States during his tenure there. Pejeau officially joined the Charbar Co. team in July of 2012 to work on the culinary offering and concept launch. Since opening Charbar Co., Pejeau has won every regional “Best Burger” award, and was featured on Southern Living Magazine’s “Best of the South” list. In the summer of 2014, Chef Pejeau and CharBar Co. Owner Nick Bergelt opened Holy Tequila, their second restaurant concept on Hilton Head Island. Chef Pejeau’s travels to Mexico inspired the menu at this gourmet taco and tequila restaurant, where he also helms the kitchen. Pejeau is responsible for breathing new life into his hometown dining scene. He pushes the limits on his burgers and crafts classic creations with a unique flair, offering a creative menu with a variety of flavor profiles. Unafraid of taking calculated risks and energetically driven to achieve his goals, this young chef is setting out to implement new standards for burgers within his industry.