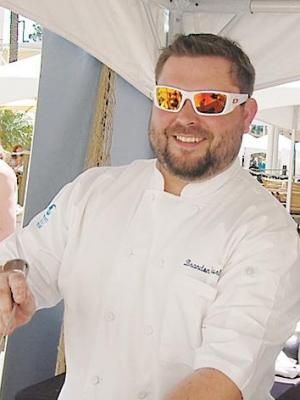 
Chef Brandon, a native of Georgiana, AL, a small town in south central Alabama, has recently re-joined his Auburn Family as the Executive Sous Chef of The Hotel at Auburn University. Chef Brandon showcases the wonderful world of traditional hand-crafted cuisine which will take you back to a time that was vividly more simple, when food is what brought the family together. His innovative creations featuring sustainable seafood, local produce and natural organic meats meld together to create Chef Brandon’s signature Gulf Rim flavors. Although he is right at home in any kitchen, competitions are where it is at for this young chef who feels in his natural element on a competitive culinary stage. In a rapid rise he has achieved goal after goal that he set for himself with an unparalleled pursuit of perfection and drive along the way. Those closest to him realize that passion and work ethic were instilled at an early age and that Chef Brandon will never expect anything from his team that he would not personally do first. Chef Brandon is an avid supporter of the people and goods that hail from Alabama. He has been recognized by the Alabama Restaurant and Hospitality Alliance as a Finalist for Chef of the Year and is actively involved in the Front Porch Revival, a non-profit organization supporting the expansion of Alabama artisans. Chef Brandon has also been integral in the hotel’s civic and charitable pursuits and believes that giving back to the community is one of the most rewarding parts of his job.