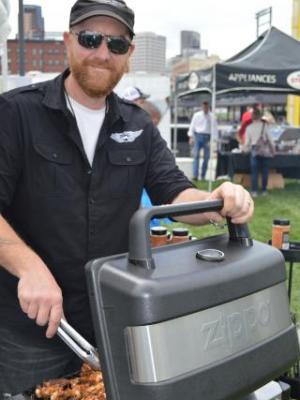 
Grillmaster Damon Holter, host of the Fired Up Food on Outside Television Network, is an ambitious food entrepreneur who owns an award-winning food manufacturing business (Croix Valley Foods), catering company and competition barbecue team. Damon’s passion for fire-kissed foods is evidenced in his creative dishes, numerous accolades and his cooking and barbecuing demonstrations and instruction that help inspire others to develop skills in grilling and smoking cuisine. Damon’s products have since won dozens of awards of distinction, being the highest-rated products in the world’s largest competitions in the barbecue and fiery foods industry. As an avid competitor, the 2015 World Food Championships will be Damon's 3rd year competing at WFC where he is looking to topple his 6th place finish in 2014 in the World Sandwich Championships to be crowned Champion in Florida.