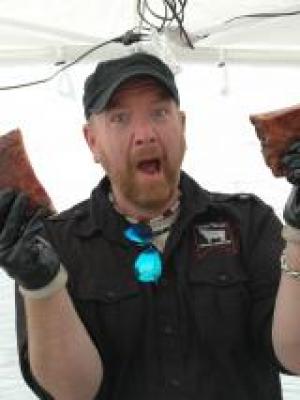 
Damon competes regularly in numerous food competitions and also conducts cooking and grilling demos at events and on television news broadcasts and regional programs. Damon finished as the runner up this past fall on an episode of American Grilled on Travel Channel, where he competed for title of Chicago Grillmaster, grilling mystery ingredients in grueling timed cooking challenges. When not competing in food challenges, Damon is creating new recipes and food products in his kitchen and expanding his line of award-winning sauces and marinades. His passion for cooking and competing will make him a formidable competitor in Las Vegas. Damon is joined by his team mates from Snappy Valley Foods. Team Snappy Valley Foods is comprised of husband and wife team owners Damon and Lu Holter from Croix Valley Foods and Dave and Maurine Merten from SnappDog Foods.. The team owns and operates Snappy Valley Foods, a co-packer of salsas, sauces, marinades and dry blend seasonings. When not producing food products, they are catering and vending with their BBQ Catering Company, Res'Que Caterers or competing in food competitions that have taken them to some of the biggest food stages in the country. With over 40 years combined experience in the restaurant, catering and hospitality industries, Team Snappy Valley Foods aims to bring their culinary expertise and creativity to the forefront at the World Food Championships.