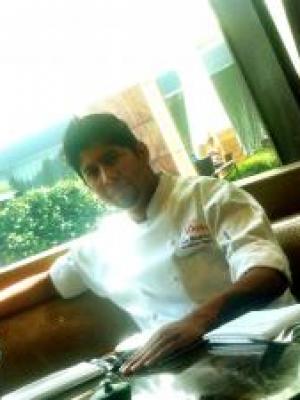 
Jose Navarro is the Executive Chef at Grotto Italian Restaurant inside the Golden Nugget. As a child, Navarro wasn’t even allowed in the kitchen. Three decades later, he is at the helms of a popular Las Vegas restaurant. As executive chef, Navarro is responsible for the development of seasonal menus based on the restaurant concept, overseeing the daily kitchen operations and training staff on the preparation of each dish served. His journey in the culinary world began at the young age of 14 when Navarro started helping out in front of a wok at a families' friend local Chinese restaurant. Later, he moved to the burger restaurant inside the Gold Coast Hotel and Casino. It wasn’t until two years later, when the Las Vegas native was working as a master cook, that he realized working in the hospitality industry was the career for him. As master cook at Caesar’s Palace’s Palace Court Navarro was quickly taken with the restaurant’s organization, the respect for the dishes being prepared, and a sense of pride emanating from the entire staff. For two years – until the restaurant closed its doors – Navarro’s appreciation for the culinary world and pursuing a career in cooking developed. For the next ten years Navarro spent his time behind the ranges at 808, Neros & Terrazza at Caesars Palace, Tremezzo and Elements at the former Aladdin and Batolotta's inside Wynn Las Vegas perfecting his skills, experimenting with his own creations. In 2008. Navarro began his time as chef at Morels French Steakhouse & Bistro at The Palazzo Las Vegas. When d.vino Italian Food & Wine Bar opened in 2009, he was promoted to executive chef at that restaurant. In 2011 chef Navarro took over the helm at Beso Steakhouse, the partnership restaurant between Eva Longoria and Landry’s Restaurant Group. He later assisted with the opening of She by Morton's, another partnership between Landry's and Eva Longoria, eventually moving to the position of Executive Chef at Grotto inside the Golden Nugget.