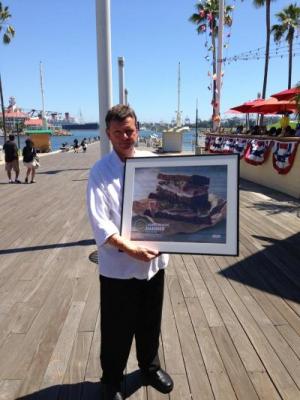 
Prior to culinary school, like a lot of us, I started working in the restaurant business as a dishwasher, quickly moving to the cook line and as I was finishing high school I was all ready a kitchen manger for a small bistro. After graduating from the Culinary Institute of America, 1987, in Hyde Park, New York, I found myself at the famed Westgate Hotel in San Diego. From there I moved to Long Beach and worked at the 555 East Restaurant, Watergrill, Igugini and eventually an 8 year employ with McCormick and Schmick's Seafood restaurants in downtown Los Angeles and on Rodeo Drive in Beverly Hills. Today, I am with 'Gladstones for Fish' in Long Beach. I opened the store as Executive Chef and we are celebrating ten years next month. We have won numerous awards including Best Seafood Restaurant in Long Beach and surrounding cities by readers of the Press Telegram.