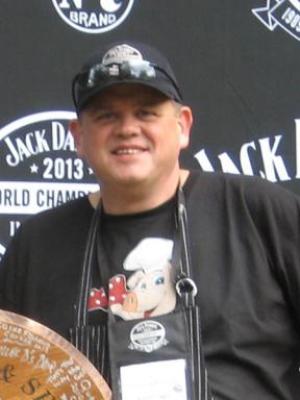 
I am a certified KCBS and PNWBA Barbecue Judge with over 5 years experience. In 2012 I was PNWBA Canadian Judge of the Year. I have judged both types of contests all over North America.I am close to Master certification in PNWBA and in KCBS I have judged Sams Club events and the WFC as well as regional events. In cooking, I have been a member on other teams where we have won 1st Prairie Smoke & Spice and 2nd place Well Seasoned Canada Q Crew at the Jack Daniels Invitational for cooking from the home land. I have been competing for less than one year as BIG DOG BBQ and in 6 events have already won14 Ribbons, 4 Trophies, some gas money and A GOLDEN TICKET!!!!! Yah BABY!! Team member John Baker and the BIG DOG will be unleashing BURGER MAGIC on VEGAS at the 2014 WFC!!! Prepare yourself to go BIG or stay on the porch!