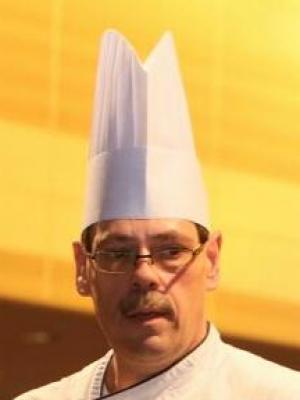 
After serving in the Army, Danny began his culinary career in Watertown, NY as a line cook at Ramada Inn. Advancing to Executive Chef he was an active member of the Thousand Islands Chef Association. A major highlight in his career was catering an event for President Clinton, Air Force One, Ted Koppel and the National Press Core. Moving to Cortland, NY Danny was Executive Chef at Holiday Inn. Danny found his culinary excitement at Kettle Lakes in Tully , NY with owner Chef Brian Shore, CEC, President of the Syracuse Chapter of the ACF, founder of Great Chefs Dinner as his mentor. As a member of the Syracuse chapter of the ACF, Danny participated in several Red Cross Benefit Great Chefs Dinners. Chef Shore encouraged creativity and chose Danny to create a course for the benefit. Moving to Murrells Inlet, SC in 2009, Danny continued to create award winning dishes in ACF Mystery Basket competitions in Myrtle Beach, SC taking 1 Silver and 2 Bronze medals. The highlight of competing came when Danny won the 2014 South Carolina Seafood Challenge. He received his 1st Gold medal and competed in the National Seafood Challenge in New Orleans. As a member of the ACF, Danny has participated in ACF Souper Suppers and Sweet Sensations events. He received a certificate in a National K2 category competition in Winston Salem, NC. Danny was recognized in the National Culinary Review. He did a cooking segment on Bob Redferns Outdoor Living show. Danny was just elected President of the Myrtle Beach Chapter of the ACF. Danny started mentoring culinary students doing demonstrations at the Academy Of Technology & Academics. Combining Academy students with Horry Georgetown Technology College culinary students at the Trio Dinner they won the Best Dish in 2014. Danny was a featured chef creating a course for Farm to Table working with HGTC culinary students. Danny continues his career at Frank’s Outback in Pawleys Island, SC. Danny is launching “All About You” , his personal chef service.