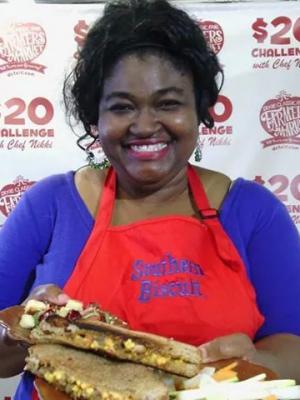 
Nikki Miller-Ka is a classically trained chef with a BA in English from East Carolina University and a Culinary Arts degree from Le Cordon Bleu-Miami. Formerly, she’s worked as a researcher, an editorial assistant, reporter and guest blogger for various publications and outlets in the Southeast. She has worked as a catering chef, a pastry chef, a butcher, a baker, and a biscuit-maker. 2014 is her second year competing at the World Food Championships, as she won the 2013 Dixie Crystals Brownie Dessert Contest. Presently, she is a private chef, star and host of a NC-based TV show, "$20 Challenge"; a food podcast host, and a tour guide for Taste Carolina Gourmet Food Tours. She currently resides in Winston-Salem and a proud member of the International Association of Culinary Professionals, Winston-Salem Jaycees and Girl Scouts of the USA.