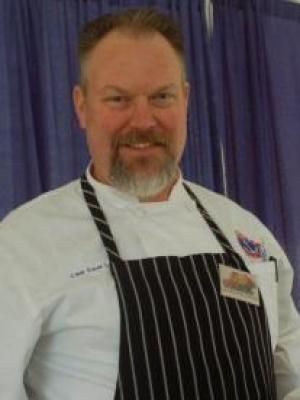 
Chef Kevin M. Lane CEC, ACE Executive Chef, Chinooks Restaurant, Seward Chef Kevin Lane grew up in the Sacramento Valley of California where he often (sometimes grudgingly) helped his family in the garden, harvesting and processing tomatoes, beans and his personal favorite, black eyed peas. He began his cooking career in San Diego at the age of 19 at The Fish Market Restaurant. Here, he found a passion for working with the freshest seafood available and spent several years working at the restaurant’s oyster bar. Kevin moved back to the Sacramento area where he attended school at LederWolff Culinary Academy and worked at several local restaurants. Back in Sacramento, he rediscovered his affection for the locally grown produce of the valley. In 2001, after working in many kitchens around Alaska, Chef Lane joined the staff at the Alaska Culinary Academy in Seward. In addition to constantly pushing to improve the program, he also coached several student cooking competition teams. He has also successfully competed in many Alaskan and Western Regional competitions including Ultimate Chef Alaska in 2008. Recently Chef Lane took over kitchen operations at Chinooks Restaurant in Seward. His New Alaskan cuisine is centered on featuring exclusively Alaskan seafood and local produce in a creative yet respectful manner. The menu features many house-smoked products including scallops, salmon and homemade sausages. In 2013, Chef Lane won the Great Alaskan Seafood Cook-off and represented the State in New Orleans at the Great American Seafood Cook-off.