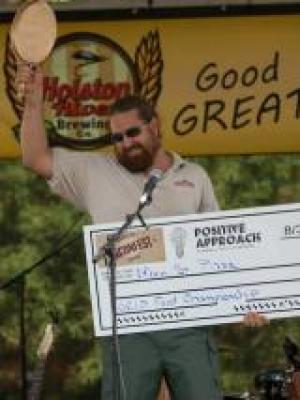 
Born and raised in the Appalachian mountains of East Tennessee, then spending his young adult years soldiering, working, and traveling in Korea and much of South East Asia, restauranteur Jamie Dove's culinary back ground is an unlikely one, but one that resonates well across the spectrum. Raised on simple Southern fair & traditions of family recipes, often straight from the soil of his great grandfather who gardened well into his 90's, and thrust into the open air markets and big city rush, smells, and tastes of Asia makes for an eclectic appreciation of styles and flavors. Jamie's latest restaurant, The Main Street Pizza Company, a different take on Mediterranean and Southern accessibility, has been most recently enhanced with his newest food adventure, River Creek Farm. Still in its inaugural year, this small but diverse farm on the Nolichucky River provides locally grown produce to both the restaurant and over forty families through a subscription service. The Main Street Pizza Company has made many strides in becoming a pillar business for what has become a very successful downtown revitalization. This year's addition of River Creek Farm as an ethical produce source has promoted the discussion of sustainability in the food industry among the community, including the restaurant's diners, food distributors, and neighboring conventional farmers.