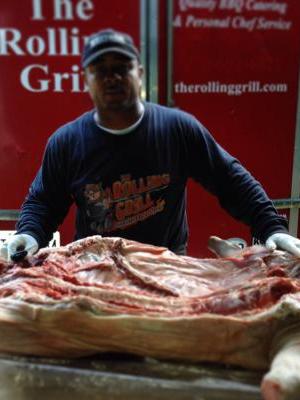 
The Rolling Grill is all about BBQ & Personal Chef work, whether it's Catering or Competitions... and Pitmaster Eric is all about cooking good Bar B Que. He has years of experience in Teaching, Cooking & Catering delicious Bar B Que around the country. Eric's vast knowledge of BBQ & food has given him the opportunity to compete on the Hit TV Show BBQ Pitmasters Season 4 & 5, and allowed him to write a How to Start a Home-based Food Truck Business book that was published in July 2012. Eric's newest endeavor is a line of seasons that features his awesome Georgia I-20 BBQ Rub! The Rolling Grill served up Top Ten (9th Place) Ribs at the 2013 World Food Championships in Las Vegas and plan to bring that same passion to the 2014 World Food Championships!