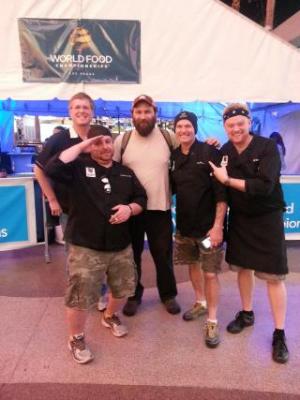 
Testimonial from Vintage Brewing Company management: "I have the pride, the privilege, no, the pleasure of introducing to the World Food Competition a chef, sired by chefs. A chef who can trace his lineage back beyond Charlemagne. I first met him atop a mountain near Jerusalem, praying to God, asking his forgiveness for the blood of a Lion with his chef's knife. Next, he amazed me still further in Italy when he saved a fatherless beauty from the would be ravishing of her dreadful, corrupt uncle. In Greece, he spent a year in silence, just to better understand the sound of a sizzle... and so, without further gilding the lily or overcooking the souffle, I present the seeker of deliciousness, the protector of Italian virginity, and the enforcer of our Lord God, the one, the only, Executive Chef AJ Hurst!!"