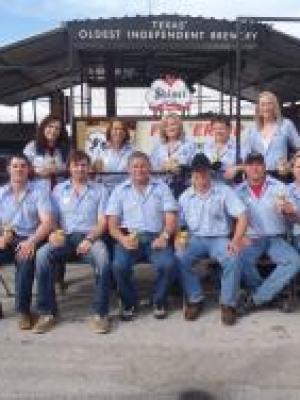 
Team Shiner Smokers led by Greg Hybner has been competing in local community Bar-B-Que competitions for around 15 years. The team is located in Shiner, Texas an extremely small community in central Texas consisting of 2070 residents. Shiner is known for its Czech/Bohemian heritage and is especially famous for the Spoetzl Brewery, home of Shiner Beer. When not competing in cook-offs, Greg works at the Spoetzl Brewery as the Assistant Brewmaster. The rest of the team consist of family and close friends within the community. After conquering most of the local competitions, the Shiner Smokers qualified to cook in the Houston World’s Championship Bar-B-Que cook-off three separate years, winning 3rd in ribs and 6th overall in 2010. Shiner Smokers received Runner Up in the 2012 Luling Roughneck Cook-Off, but this year persevered to win 1st Overall giving them the bid for the World Food Championship competition in Las Vegas.