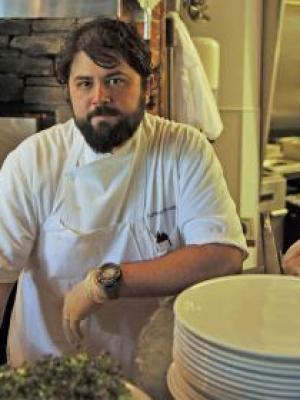 
Hal M. Holden-Bache is the executive chef and owner of Lockeland Table which opened August 2012 in Nashville, TN. However, his love of cooking began years before this most recent restaurant venture. As with many chefs, Hal's culinary education began at a young age cooking alongside his mother, preparing the family meals. His passion for knowledge of all things culinary led him to pursue a Culinary Arts degree at Shepherd University, in his hometown of Shepherdstown, West Virginia. After graduating, Hal was accepted into the coveted Culinary Apprenticeship Program at the world-class Greenbrier Resort in White Sulphur Springs, West Virginia, a perennial AAA Five-Diamond award winner. During his studies at The Greenbrier, Hal was recognized as a rising star and was given the opportunity to intern under world-class chefs including Hartmut Handke CMC, Peter Timmons CMC, Tom Colicchio and Butcher, Larry Griffin. After graduating with top honors, Hal traveled to Nashville, TN for a visit. Being struck by the friendly and inviting culture of Music City, he decided to stay and has spent the last 12 years exhibiting and delighting guests with his culinary talents. As his first venture in Nashville, Hal worked as the executive chef at the famed Nick and Rudy's Steakhouse for five years. He then spent a brief time on the team of Executive Chef Tyler Brown at Capitol Grille at The Hermitage Hotel before moving on to be the executive chef of Eastland Café, an East Nashville favorite. After five years at Eastland, Hal decided to venture out and open his highly anticipated new restaurant Lockeland Table. While operating or standing at the helm of these Nashville staples, Hal found time to get married and welcome the birth of his son, Cole. He also participated in the following events: • In 2002, after just arriving into town Hal won the "People's Choice Award" with his Lobster Bisque and Chive Chantilly creation for Our Kids Soup Sunday. • In 2003, Hal followed his initial victory by winning "People's Choice Award," this time with a Five Onion Soup with Crispy Shallots, a soup he had enjoyed many times while training at The Greenbrier Resort. • In 2004, at Soup Sunday, Hal won first prize in the "Souper Chef Challenge," competing against other Nashville chefs in a one-hour mystery basket contest. • In 2005, Hal won both "People's Choice Award" and the "Souper Chef Challenge," this time with a Smoked Seafood Chowder. • In 2007, Hal once again won "People's Choice Award" for his Roasted Pear Soup with Gorgonzola/Walnut Crostini. Other Awards and Distinctions • In 2005, Hal won second place in the "Tennessee Restaurant Association Beef Competition," where he competed against 16 other chefs from Tennessee. • In 2010, Metromix Nashville competition voted Eastland Cafe, Best Restaurant under Chef Hal's lead. • Also in 2010, Hal was given the George R. Williams Award In Recognition of Participation and Support for "A Taste of Nashville," an event that helps with local education at Pearl-Cohn Business Magnet High School. Hal looks forward to continuing to showcase his culinary talents at Lockeland Table, serving the Nashville community and extending his culinary knowledge, skills, and accomplishments. Hal lives in Nashville with his wife Stacy and son Cole.