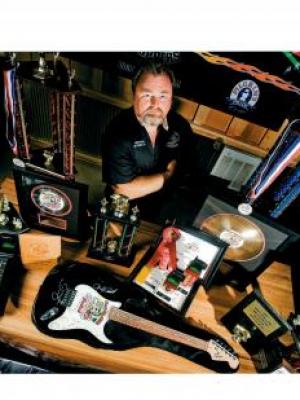 
It all started with my father-in-law giving me a homemade Fall City Beer Keg Grill in about 1983. A friend and I went to his father's pig farm to kill and slaughter our very first hog. Although this was a small hog, it was hard to cook on a beer keg! Coming up with our own cuts of meat turned out pretty good; smokin', chillin' and grillin' became my passion! After this I started cooking almost daily on my one of a kind keg grill. I heard rumors my great uncle Tom was selling his custom smoker that was built by my cousin Steve. I don't exactly know what year it was, but sometime in the mid 80s I went to fetch up that smoker from my uncle and there it was sitting on a "whodo" trailer, the smoker I still have today. I spent many nights staying up learning to cook on an offset stick cooker and finally I entered by first competition, the Annual Canoe Festival at Bowling Green's Beech Bend Park. Throughout the 70s and 80s this was the largest party Bowling Green ever held, with numerous big Rock n Roll bands. The local Elk Lodge was throwing this kick ass party, BBQ competition and canoe races to raise money for charities. To me, of course, this sounded like more fun than Disney World. What more could I ask for, beer, BBQ and kick ass music!? I'M IN!!! This competition was not a sanctioned contest but was judged with local celebrities, the sheriff, chief of police and the dog catcher, you know where I'm going with this. So as all BBQ contests goes, Friday night was a party. The meat that all the teams were cooking would be judged and sold to raise money while the Elk Lodge cooked mass quantities of meat to sell. They were using a 16 foot long direct heat grill to cook freshly butchered BBQ shoulders. A good friend of mine Steve Walker, nicknamed Bird, was PitMaster for the Elk Lodge on this inferno of a grill. As you can imagine all the fat drippings off that pork caught on fire! Bird jumped off the trailer to safety and luckily the volunteer fire department was on site for such an alcohol induced disaster to put the flames out and save the meat. Around 3am the Elk Lodge asked me if I would cook the meat for the local charity donations. I was able to cook 300lbs of meat for their charity and come in 2nd place in the competition. I won a trophy that was about 6inches tall and worth about a quarter that I held on to for years but is now lost. I would gladly trade ANY of my newly won trophies to have it back. It will be over 20 years before my next competition. Until my next competition, I have been an electrical contract in the city and county of Bowling Green, KY since 1989. I have had many hobbies over the years: racing, boating, motorcycles, diesel trucks, and finally back to BBQ. I found that BBQ competitions in some way can bring all my hobbies together in one. I get a rush in BBQ like I did going down the drag stripe. I get the relaxing feeling on a Friday night, like I did with boating. Motorcycles are involved when my friends ride their choppers out to support my team. And you can't forget diesel trucks, I would be stuck at home without my truck pulling my rig all over the country. Sounds like BBQ is the best hobby a good old country boy could have. My hobby turned into something much more it turned into my passion. I don't cook with my offset stick smoker. I cook with a BackWoods Smoker which has done me pretty good. In the 2013 season I had 31 contest and 27 of them were top 10 finishes. I had 11 Grand Champions, 6 Reserve Grand Champions. 13 top ten chicken calls, 8 were top five, and 4 were first place. 23 top ten pork rib calls. 13 top five and 2 were first place. 16 top ten pork calls. 13 top five and 4 first place. 22 top 10 brisket calls. 15 were top five and 4 were first place. We finished the season 2nd overall with 2940 points. That is only 3 points off the all time high record. In our 2014 season we are currently 1st in the overall KCBS points. 1st in Chicken 6th in Pork Ribs 6th in Pork 1st in Brisket