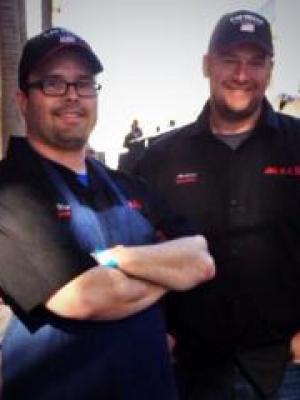 
2013 World Burger Champion: Wade Fortin Fifteen years in the food industry accompanied by a handful of lessons from the school of hard knocks and Wade Fortin/Second City Smoke can rightfully claim the title as the 2013 World Burger Champions. For Wade Fortin and Second City Smoke teammate, Andrew Wiegand, the road to the World Food Championships began in Carol Springs, Ill. at their local Bull Burger Battle event, presented by Bull Outdoor® Products. After schooling the rest of the day’s competitors in the art (and taste) of the burger build, Fortin earned a golden ticket to compete in the World Burger Championship as part of Team Bull. Fortin brought a powerhouse line-up of recipes that proved to serve the team quite well. For their Structured Build, the team turned-in “Le Patron”, a rendition of the traditional patty melt highlighting a TNT™ burger patty, a cheesy duo of extra sharp white cheddar and imported gruyere, candied bacon and balsamic glazed shallots on grilled sourdough. “The TNT™ burger patty cooked up perfectly and was an ideal match for our patty melt recipe,” said Fortin. “It had a rich, beefy flavor that was super moist and was the star of the dish.” Having managed the competition in the first round of the World Burger Championship, Fortin and the Second City Smoke team advanced to the Top 10 round. Their first place infused-build submission, “El Toro”, which required the use of A.1.® Steak Sauce, gave the team an added boost of confidence as they then moved forward to the Final Table round. Inclusive of Fortin's Second City Smoke, Team Bull was well represented in the top 10 of the World Burger Championship, as three out of its six team-members made it into the Top Ten finals. Team Bull certainly came to play in Vegas. “We took the steakhouse to the grill by combining the classic rib-eye steak, in burger form, with the great taste of A.1. Steak Sauce, which we then infused into a classic horseradish cream sauce,” said Fortin. “The tangy A.1. Steak Sauce was a perfect complement to the creamy horseradish and helped bring home the championship for us.” Of course, a craftsman is nothing without the accompaniment of first-class tools, and Fortin certainly gives credit where credit is due. “The Lonestar Grill by Bull Outdoor Products was a big part in our championship win,” said Fortin. “We were able to get an incredible sear on the winning burger (“El Jefe”), which contributed to its awesome flavor that blew the judges away." In the Final Table round, he placed an emphasis on giving the judges “familiar and middle of the road flavors,” with particular attention on building the patty itself. “We wanted to make sure that the actual burger patty tasted the best before we thought of accompaniments to go with it,” noted Fortin. After all, they were competing as the World Burger Champion. The 2013 World Food Championships marked Second City Smoke’s 16th food-sport event on record, and it appears there’s no slowing them now. “I’ve already started planning for 2014,” said Fortin. “‘Two-time World Burger Champion’ has a nice ring to it.”