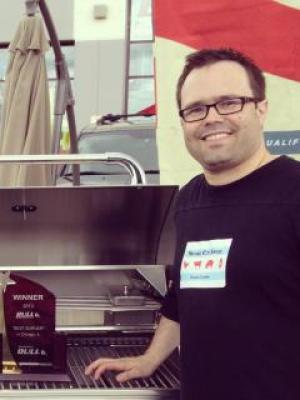 
Chef Wade Fortin has been cooking professionally for 20 years. Recently he has joined up with teammate Andrew Wiegand to form the Second City Smoke competition BBQ team. Even though they have only been competing for two and a half years, they have already achieved the status of one of the top teams in the Midwest by qualifying for the Sam's Club national championship finals. Winning the Bull Burger Challenge in Chicago was just the first step in the quest for the World Food Championship Title. Chef Fortin takes great pride in designing a burger that is unique. He believes that if you start with the best mix of Prime Beef and then add specific accompaniments that have bold flavors, spice, and texture you will have a burger that truly stands above all others.