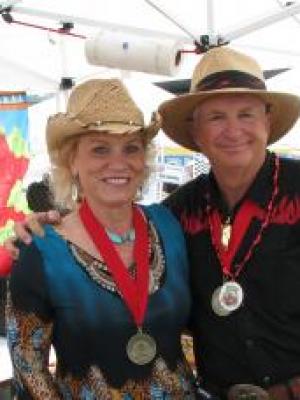 
Steve Tomasek’s Croatian Chili is not a one-trick cooking team! We have won chili/salsa championships in 12 states, the Mexican National Championship, and in Canada. Steve is a Grand Master chili cook who has also won the Colorado Beef Cooking championship and has been featured in the Denver Post, Denver’s Homes & Lifestyle Magazine and has had recipes published in magazines such as Sunset and Rachael Ray’s, “Everyday.” Steve’s cooking skills go beyond chili with the creation of over 200 non-chili recipes, sponsoring a gourmet cooking group, and by attending cooking school in Tuscany. He’s the only person who has lost the World’s Championship Chili Cookoff TWICE by one point. Steve’s Sous-Chef for the WFC and wife, Bonnie, is a Grand Master cook in both red chili and verde and one of the very few cooks who have collected a top five trophy (more than once) in all three World’s competitions: Red, Verde, & Salsa. She’s also a three-time and undefeated World Shoot-n-Holler Champion. She won the American Spice Trade’s chili contest that was featured in dozens of newpapers such as LA Time’s “Super Bowl Chili.” We have helped start several chili cookoffs that have raise over $100,000 for charitable organizations such as the National Kidney Foundation of Colorado