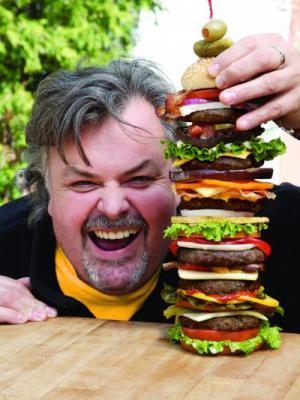 
I am an award-winning chef and food entertainer, who's parlayed his passion for food into a culinary tour de force that includes more than a dozen cookbooks, shelves of food products, live culinary performances, TV and radio cooking shows and appearances as well as culinary demonstrations, a catering company and teaching. Known for his pyrotechnic charm and fearless culinary spirit, it's no surprise that GQ magazine labeled him the "Crazy Canuck Barbecue Kingpin”. The dude just loves to cook! Ted's quest for creating "real food for real people" has seen this high-profile culinary barbecue guru demonstrate his €air for grilling in all venues from swanky ballrooms to the Pacific Ocean to a downtown Toronto parking lot. Today, he owns more than 100 barbecues, grills and smokers in all shapes and sizes and never goes anywhere without one in the back of his truck. Ted was awarded two prestigious awards for his cookbook, Napoleon's Everyday Gourmet Grilling - Best Barbecue Book by the Gourmand World Cookbook Awards and it also won the Cordon d' Or – Gold Ribbon BBQ Cookbook Culinary Academy Award in the 2008 Awards Program. Then in 2009, Ted took home Best Barbecue Book at the Gourmand Cookbook Awards for Napoleon’s Everyday Gourmet Plank Grilling. On May 6th, 2010 Ted held the Guinness World Record for the largest hamburger weighing in at 590lbs, a huge accomplishment for his career. And just this year, Ted won Best BBQ Book at the Gourmand Cookbook Awards for Napoleon’s Everyday Gourmet Burgers. Last year he launched two books, Beerlicious and the Complete Idiots Guide to Smoking Foods. Ted’s newest cookbook for 2013 is Gastro Grilling, 135 delicious full color recipes. For additional information on Ted's World Famous BBQ, visit: www.tedreader.com