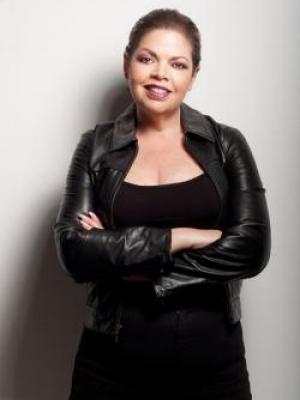 
A (semi) quick note about me. My name is Jodi Taffel, a.k.a. The Bacon Babe, and like almost everyone else who has moved to Los Angeles from somewhere else, I am an actor. (I’m currently recurring as Brenda, The Meatball Lady, on the Disney Channel’s show, SHAKE IT UP as well as starring in the new web series, THE GALLERY). This, of course, means that I often have a lot of down time between jobs. And rather than clean the house or go to the gym, I cook. And like the “good Jewish girl” I am, (insert giggle here) I like to cook with BACON! Hence, my nickname, The Bacon Babe. I also like a challenge, so contest cooking seemed like a natural fit. Here’s the timeline of events. My friends Heather and Dan entered The Grilled Cheese Invitational in 2009 and won a trophy. Now, I thought that was the coolest thing ever and decided right then and there that I would enter the very next year. I mean, how hard could it be? It was grilled cheese! Well, when I found out that there would be over 200 entries, I almost decided to call it off. But the natural competitor in me wouldn’t allow that. It was either go big, or go home. And one year later, I not only entered The 1st 8th Annual Grilled Cheese Invitational, I WON! Out of 200 “sammiches” in the Kama Sutra Category, I won 1st place! That one contest started me on a path that, frankly, I never expected to take. I defended my grilled cheese trophy in 2012 and took home 3 more trophies, including the much-coveted “Frontiers In Fromage Award”. Outside of the contest arena, I made it through 3 rounds of auditions and food tastings for the most recent season of MASTER CHEF, even getting as far as meeting Gordon Ramsey, and was also invited to compete for a slot on THE TASTE with Nigella Lawson and Anthony Bourdain. (Unfortunately, I was already committed to shooting THE GALLERY at the same time). And last week I won my entry into The World Food Championships at The Big Bite Bacon Fest, with a dish that includes 4 different Bacons, and 5 different cheeses. Hey, I said it before. I like to go big, or go home!