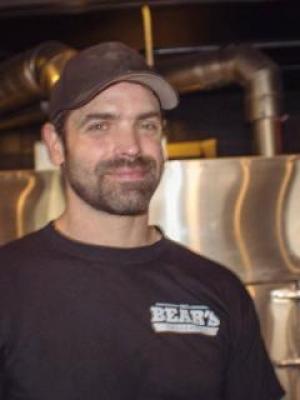 Jamie “The Bear” McDonald knows a thing or two about Bar-B-Que! Born and raised in “The BBQ capital of the world” Kansas City, Missouri, Jamie spent his high school years working for one of the best barbecue restaurants in the city. Upon graduating from school, Jamie joined the Navy and in his travels across the U.S. and abroad, was always on the look out for great bar-b-que. Much to his dismay, nothing lived up to the barbecue he grew up eating back home. This forced Jamie to rely on his skills he picked up while working in high school. From wood and meat selection to his homemade sauces and rubs, Jamie has near perfected his craft.

Always being told by his friends and family that his BBQ should and could be sold, Jamie decided to take the next step…..with that “Bear’s Smokehouse BBQ” was born!

Come by and see Jamie, his wife Cheryl, & their two kids and see what REAL BBQ tastes like!

Jamie “The Bear” McDonald is the reigning Wing Bowl Champion and number one ranked Independent Competitive Eater by All Pro Eating. Jamie won Wing Bowl 21 by devouring two hundred and eighty-seven wings in only thirty minutes. The total was the second most in Wing Bowl history, trailing only the previous year’s champion Takeru Kobayashi. Just prior to Jamie’s Wing Bowl victory, he was declared All Pro Eating’s number one ranked Independent Competitive Eater in the World and Competitive Eating Rookie of the Year. Most recently, Jamie was named the National Hamantaschen Eating champion and new world record holder with 48 in five minutes.