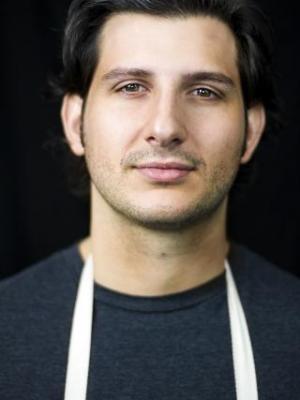 Chef Giorgio Rapicavoli (27) has accomplished an impressive lot for his age. The passionate young talent has led at a handful of respected restaurants, rubbed elbows with world-famous chefs, was Miami’s first winner of Food Network’s Chopped, owned, operated and killed it at the city’s favorite pop-up restaurant Eating House, and has most recently fulfilled his dream of opening Eating House as a permanent fixture on Miami’s evolving culinary scene.

As early as a toddler, Rapicavoli seemed destined to be a chef, spending hours watching cooking shows in lieu of cartoons. Born in Miami to an Italian mother and an Argentine father, Rapicavoli’s love of cooking blossomed at age five when he and ma’ would spend Sundays in the kitchen making her beloved pomodoro sauce. The meals became more elaborate and roles reversed between teacher and student, but tradition carried on – as far as today. After high school, Rapicavoli enrolled in the Culinary Arts program at Johnson and Wales University, where he upheld a nearly perfect GPA and a repeated standing on the Dean’s List. Alas, never one to be called conventional, Rapicavoli dropped the program just one semester short of graduation to dive full-force into the restaurant industry. He took turn working under renowned chefs, including Robin Haas and Adam Votaw, was the executive chef at Chispa in Doral at just 21 and then honed his craft during his three-year executive chef stint at 660 at The Angler’s on Miami Beach.

The young cuisinier is a repeated guest at Slow Food's Terra Madre in Italy where he’s worked alongside internationally revered chefs Ferran Adria, Alice Waters and Joshua Viertel, an experience Rapicavoli attributes to changing his life, as well as his understanding of food.  In 2011 he filmed an episode of the popular Food Network show Chopped, blowing away the judges and host. He made such a strong impression that one particular famous chef invited him to New York City to offer him the prestigious position of chef de cuisine; Rapicavoli turned down the job to return to Miami and open the pop-up restaurant Eating House.

Launched February 2012, Eating House was instantly a Miami foodie and media favorite, creating a cult following of avid imbibers chomping at the bits to see what Rapicavoli would create next. Operating solely out of the kitchen of an existing breakfast and lunch diner called Café Ponce, Rapicavoli had no storage and little time to prep before opening each night for dinner. He shopped daily, sourced from (very) local farms, grew his own herbs and created each night’s menu based on what he found and what he was in the mood to cook.  Creative, fun and sometimes funky twists on mostly comfort food were dished out to blissful guests for six months before it closed, as planned, at the end of September. Both Rapicavoli and his restaurant remained in the spotlight throughout their reign, earning Best Pop-Up in the Miami New Times, a stellar review in the same paper, and the cover of MIAMI Modern Luxury’s dining issue, among many others.

An avid artist both in and out of the kitchen, Rapicavoli demonstrates his passion for street art and love of music through his work with stencils and spray paints, as well as his occasional dabble into the world of sampling and mixing various beats and songs. On any given evening at Eating House the crowd may be privy to the sounds of one of Rapicavoli’s very own deejay mixes.

Rapicavoli and business partners Alejandro Cassanova and Henry Hane recently announced they were purchasing Café Ponce from its owners and would open a permanent and more grown-up installment of Eating House early this fall. Meanwhile Rapicavoli is on a culinary tour throughout the U.S., and participating in a handful of high-profile culinary events.  Fans can only sit tight and wait to see what he’ll have in store upon his return.