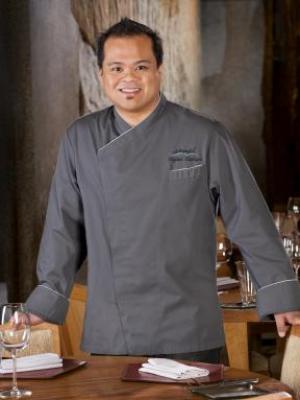 Royden Ellamar, a Hilo Hawaii native, learned to respect nature at a young age. He grew up farming, fishing and hunting in the Big Island’s pristine terrain with his family and from them, he gained a keen understanding of the process food goes through while traveling from the farm to the table. This is knowledge he has relied on throughout his career and in the kitchen at Sensi.

“It is very important to me to have relationships with the people that grow our food,” Ellamar said.  “I like knowing that the food we present to our guests is the best quality and meets the exceptionally high standards people expect from Bellagio restaurants.”

Ellamar’s culinary career began at the University of Hawaii where in 1994, he earned an associates degree in food service.  He secured his first job in 1996 as sous chef at Fiascos Restaurant in Hilo, during which time he further developed his passion for working with local farmers to bring homegrown produce to the restaurant.  After four years he moved to the Four Seasons Resort Hualalai where he wore several hats during his tenure including sous chef of Pahuia, the resort’s signature restaurant. Here he continued his work with local farmers by assisting with a menu redesign that featured local ingredients.

Ellamar left the island four years later for the mainland and worked throughout the country as chef de cuisine at notable restaurants including Seasons Restaurant at Four Seasons Hotel Chicago and The Beverly Hills Hotel and Bungalows before making his way to Las Vegas where he accepted the position of chef de partie at MGM Grand’s L’Atelier de Joël Robuchon. In 2008, Ellamar earned the position of chef de cuisine at Bellagio’s Sensi and only three years later, was named the restaurant’s executive chef.

Throughout his time at Sensi, he has brought his knowledge of food sources and farmer relationships to the restaurant by redirecting the menu to support local agriculture and sustainably produced proteins. He also takes his staff to local farms to teach them the importance of building relationships with local producers and has implemented an upstream recycling program for the restaurant.

It is his continued dedication and commitment to supporting local food growers that Ellamar is most proud of throughout his career.  He has brought lessons he learned from his family to each restaurant he has worked.

“Food affects family and culture,” Ellamar said.  “Being able to work with great ingredients and then transform food into a beautiful dish that people are excited to look at and ecstatic to eat, that is the best aspect of being a chef.”