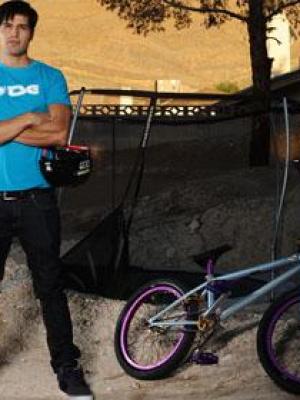 Born and raised in La Paz, Mexico, Ricardo Laguna moved to Las Vegas when he was just 13 years old. Laguna first began to ride BMX as soon as he and his family found their new home in a trailer park in Las Vegas. The trailer park was all they could afford at the time, but who would have thought his new home and some dirt jumps in the area would launch his career as a Pro BMX Bike Rider. He turned pro at the age of 18 and was crowned the "King of Dirt" and the #1 Latin and South American Dirt Jumper.

Throughout his career Laguna has competed in the X-Games, The Dew Action Sports Tour, Gravity Games, Nokia Fise, BMX Masters, Lord of Dirt Competition, and the World's. His career has led to a number of huge accomplishments including being the first Spanish-speaking announcer at the X-Games inside the Home Depot Center and Staples Center. Laguna has performed in shows world wide and has hosted his own Action Sports and Music Festival in Las Vegas for the past 10 years called "The Ricardo Laguna BMX Dirt Challenge" at Extreme Thing. His face has graced the cover of several BMX magazines plus Las Vegas Magazine and Vegas Seven Magazine. He was named one of 2013’s Most Intriguing People by Vegas Seven and voted the hottest bachelor by Vegas Magazine in 2009.

Laguna has also appeared in several nationally acclaimed television shows including Holly's World on E!, hosted episodes on Latination, featured on ESPN's Hottest Whips as well as appearances on Fuel TV and Telemundo. In March 2012, Laguna premiered The Ricardo Laguna Project, on MTV Tr3s and MTV Latin America – a reality series that offers a glimpse into the life of Laguna as he attempts to break three world records, begin his own family business and balance his family and Las Vegas social life. He was nominated by BMX Plus for Dirt Jumper of the Year. In his free time, Laguna enjoys speaking and riding at public schools and skate parks here in Las Vegas as well as working on his own BMX training facility in his backyard.