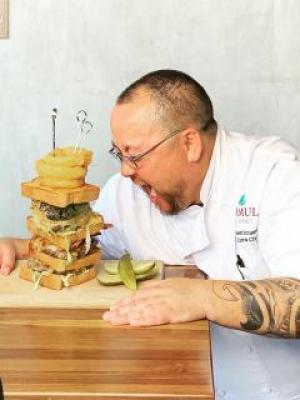 
Award-winning Chef Keoni Simmons grew up in Huntington Beach, CA. He received his first cookbook in 5th Grade and since then, has become very passionate about food. His multi-cultural background has given him the ability to cook many different styles, most preferably Pacific Rim comfort food. When he’s not cooking up a storm, he’s following his team- the Pittsburgh Steelers, watching new movies in theaters, or exploring the craft beer scene of Southern California. A veteran of the World Food Championships, Keoni has placed Top Ten in the sandwich category in both Las Vegas, NV (2013) and Kissimmee, Florida (2014).