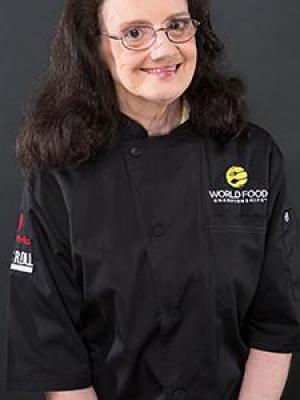 
I am thankful to be competing again at the WFC, and so Excited..this will be my coming up 5 th year attending :-) I'm retired, married 40 yrs, have 3 beautiful grown children 2 son\'s 1 daughter and 5 precious grandchildren . My faith, family and cooking/baking are my Life's Loves~ ~ My sweet grandma Mae and Dad were my inspirations in life especially my passion for cooking/baking. In my later years I remembered how much my grandma dreamed of being in the Pillsbury Bake Off but sadly her dream didn't come, and I wanted to fulfill her dream and over joyed to be in the Pillsbury Bake Off 45th, 46th and 47th and won a award plus had my recipe on the cover of Pillsbury Bake Off Cookbook and hope now my grandma is smiling in heaven. In the road to fulfill grandma\'s dream I realized just how much I loved cooking too and I have been fortunate in several contests. ***Currently** I was blessed this 2022 was a finalist Betty Crocker 100th Anniversary, Won the Tea Chef March Month for Strawberry/Banana Contest, Mt. Olive Pickle Contest, & TOA 3rd place Golden Ticket for MojoLalechonera Contest and for 2021 One of finalist winner Treasure Cave Cheese Contest won a Crock Pot plus coupons also chosen in the Melissa Produce Contest was chosen as one of the Top 10, also won Grand Prize in Creamed Honey Contest, plus in 2020 to place and earn 2nd. place in WFC's Taste of America Contest for my cheesecake. Recently for 2020 I was one of the 5 winners for the channel 7 Spartanburg/ Ingle's Store for my chili recipe, for 2019 & 2020 I was honored to be in the National Festival of Breads and win the Soy Award for my Sicilian Star Bread and also Won the Grand Prize for the 2019 Lard Lovers for my Crumble Carrot Cake Caramel Cheesecake Pie, for 2018 also to come in first place for my dessert for the Lucky Leaf contest, and win the grand prize in the healthy Royalty Pecan Contest and also won my 5th blue ribbon on Just A Pinch and have a recipe feature in this upcoming Nov. 2018 Taste of Home magazine. For 2017 WFC I felt so honored to of made Top 10 in the dessert category, plus place 2nd in the WFC's "Taste Of America" Contest and win the Grand prize in White Castle Contest, also won the Grand prize in the BakeSpace.com Flavors of Your Heritage Recipe Contest and also win Sugardale Hot dog Grand Prize. For 2016 King Arthur contest I placed 2nd, and the Trump Towers contest and recently won the Midwest Living contest. So grateful through the years entering these contest I have been in like the above mentioned, fulfilling grandmas dream with Pillsbury Bake Off 45th, 46th, & 47th and I also won the first Martha White Muffin Mix Contest with the Grand Prize, and many times with the Betty Crocker Cookie Contest, Crisco Contest Placed 2nd, Gold Medal Flour Contest, Martha White Cornbread Cook Off, Grand Prize for Vidalia Onion Contest and Miracle Whip Contest won, Nestle Holiday Contest 2nd, and I feel very blessed to of did so well in these cooking contest as well as many other cooking contests I have also won and been apart through the years and I am fortunate and thankful to of been apart of. I truly owe great thanks for all of this to the good Lord above blessing me with the ability and my teacher here on earth my sweet grandma Mae.