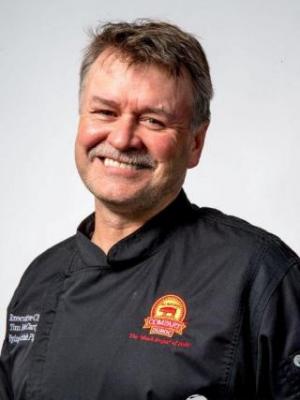 
Chef Tim McCarty Bio Chef McCarty is the Executive Chef at the Rochester Golf and Country Club in Rochester Minnesota. With 42 years of culinary knowledge, he has worked in many different kitchen settings from Hotels, Restaurant, B&I, Catering, Country Clubs –Ect which has given him a very well rounded back ground. Over the years he has built a great working relationship with Minnesota , South Dakota, National Pork Board, Minnesota Soy bean, Midwest Dairy, U.S. Meat Export Federation, Potato USA and Superior Fresh. In 1998 Chef McCarty did his first Taste of Elegance contest that has grown into many cooking demo’s, 14 TV cooking segments for Twin Cities Live, Judging state and national contest. Doing many out of state contest 9times in San Antonio TX Paella Challenge with a 2nd place finish in 2022and in 2016 and 2020 winning a Golden Ticket to the World Food Championships placing 5th 2 times and 9th once. Returning in November to Dallas to compete again. ACF medals 2 bronze and Silver 2 and 2006 Celebrated Chef for National Pork.