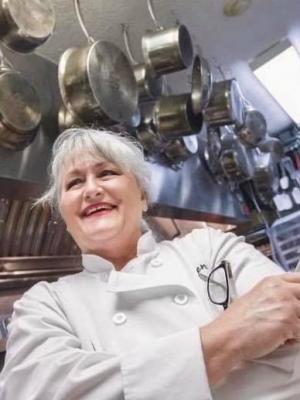 
It’s hard NOT to smile when you get to taste her food... as it’s certainly made with love, the finest ingredients and is usually a fusion of cuisines that shows know how and the use of inventive techniques and is a palate pleaser. Her go to style of cooking is Spanish, Asian, classical French, Italian, good ole southern and South American, but she is fearless in the kitchen and there is nothing she will not or can’t cook. You may have seen her win several popular TV cooking competitions (Food Network) and be a finalist on many others. She is humorous to converse with, but her knowledge of flavor pairings, techniques and international food is astounding. She knows and recognizes how to elevate the ordinary to a stellar creation. She has raised thousands of dollars locally and donated her talents to many worthy causes. She is proud to be known as #theNanaChef, but don’t let her gray hair fool you, she not only can cook, but she knows how to put together big events and handle catering engagements for clients regardless of size. She has been the personal chef for small dinner parties to a large corporate celebrations such as Southwest Airlines and Chase. She is a natural with demoing food products and interfacing with customers as she shares tidbits of her amazing story. She serves as a judge to many contests, serves as a cookbook editor and writer as well as a publishing/media awards judge. She has done so much in the mere 10 years since she decided to peruse her dreams in the culinary industry. Once she retired from the US Space Program with years of dedicated tenure on both the Space Station and Space Shuttle Programs, she returned to college (Galveston College-Culinary Program) in pursuit of her encore career of becoming a proven professional chef. After completion of her internship and her culinary studies she became a Pantry/Garde Manager Cook at Moody Gardens / Shearn’s Prime Steaks & Seafood (Galveston, TX). She later became the Chef De Cuisine of the noted “eculent” restaurant. (Kemah, TX). She is an avid food lover and inspires local youth to find a path in the food industry during her career opportunity talks to high school and college students. Nancy served on the Advisory Council for Galveston College Culinary Arts Dept for 5 years. She has won many accolades and awards for her culinary talents including but not limited to: * Barilla Pasta Chef Competition * Cutthroat Kitchen Champion * Food Network Star Finalist * Supermarket Stakeout Champion * Top Ten World Chef Category World Food Championships * A Top Female Chef-Houston. She has served as a promoter, brand ambassador, recipe developer and food stylist for many organizations, food products and food service companies. She recently completed 4 years as a WFC Ambassador and lent her corporate and project management skills to help grow food sport. She put on ancillary events such an the acclaimed Granny Grilling Challenge for several years. She has served as the Mistress of Ceremonies for numerous food events and epicureans as well as being auctioned off as a fund raiser multiple times. She was the project leader and editor of two sold out corporate cookbooks that raised funds and needed supplies for area food banks. She has provided approved menus and cooked many meals for the Salvation Army and Ronald McDonald House. Not only is she a community contributor, but she has also served as a Food Champ/Walmart Chef designing new recipes for in-store activations as well as the massive serving of the thousands of Joy Globes Cocoa Factory drinks recently. One of her favorite things to do is to teach family and friends how to make a dish or use a kitchen tool or a new technique. She is high energy and puts beautiful food on a plate intended to make you drool and want to eat it! While her style is comfort, she know tricks that make you want her to cook your bucket list meal. She has been featured in Delish, the Food Network Magazine, Taste of Home, 10,000 Bites Around the World, BuzzFeed, food52, Coast Monthly, I-45Now, Food.com, islander Magazine, as well as in local media print, radio and on TV. Many of her award winning recipes are now available at GourmetNFT.com