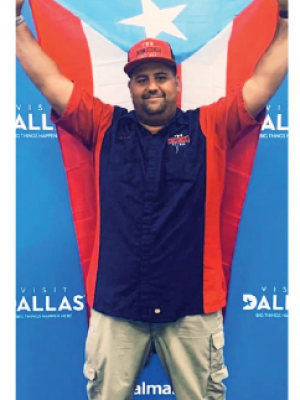 
Inspired by Myron Mixon, George “Tuffy” Stone and the cast from BBQ Pit Masters; boxing nights by the pool, softball Saturdays and our kids' birthday parties were the beginnings of this BBQ enthusiast, Orlando J. Lugo. OJ’s BBQ was born in our backyard and quickly became a BBQ weekend warrior, well known for my fire wood meat concept (and great parties…). What started with a cheap gas grill became a wood and charcoal burning armada, composed of grills of different sizes, two smokers, a Caja China and a smoking BBQ vault. With the encouragement of our friends and families, in February 2017, as a rookie, I entered our first BBQ contest, the 10th Annual Smoking Hot BBQ Competition, Puerto Rico & Caribbean Circuit. Here I won 1st place in Steak, 2nd place in Wings and 4th place in Pork Chops; earning the Grill Challenge Grand Championship and a Golden Ticket spot in the World Food Championship 2017. In 2016, I started a catering company hoping to bring the “BBQ MAZUCAMBA” experience to people’s homes and events. Now I bring the BBQ MAZUCAMBA from my food truck in Humacao, Puerto Rico. I still cater, still compete and still love fire, smoke and grill BBQ!