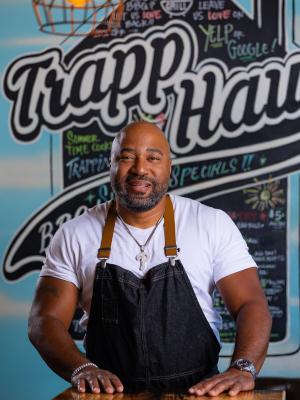 
Phil Johnson has always done life his own way. Freestyle, one might say. Growing up in an urban setting in an all-black community in New York, he reveals that the kids in his neighborhood didn’t have a lot of options to set themselves up for a successful future. While many dreamed of college, the reality was most of the parents could barely afford to meet the rent on their apartments let alone save for their children’s college tuition. Aside from those top scholars or star athletes that were able to secure a scholarship, for more, college would remain just that — a dream. Phil admits that growing up a latchkey kid in the Bronx meant he had to be tough. “Walking to school, you passed drug dealers and burned down buildings where prostitutes and crackheads dwelled,” he says. And things weren’t much better once he arrived at school. He recalls having to walk through metal detectors just to get on campus — of his elementary school. Not only that, but the crack epidemic in his neighborhood meant drug dealers and rappers were glorified. “Dreams of being anything else beyond those were considered soft,” he says. Growing up, Phil quickly decided he wanted to be the change — starting with his own neighborhood. Johnson was taught to cook at an early age from his grandmother and mother. That time in the kitchen helped him meld the cultures he grew up with in New York — Asians, Jamaicans, Puerto Ricans, Dominicans and Africans — through a unique culinary outlet. His passion for food eventually led him to defining success on his own terms — and developing his own unique way of cooking, which he calls “Freestyle BBQ.” Never one to follow the patterns of his own rough neighborhood that seemed to cycle generation after generation, Phil sought to do something different. He wanted to break the mold to give his family a better life, but also to help future generations in his community see that they can define success on their own terms. However, he wants kids to know that while they can (and should) dream big, they’re going to have to work to achieve their goals. “We are all different and there is nothing wrong with that,” he says. “I want inner city kids — from every part of the world — to know that you can be what you want to be — whatever that is — if they really strive for it.” Phil thrives on being different — and that’s what has made him so successful in the world of BBQ. While others are doing Texas style, Kansas City style or Memphis style BBQ, Phil Johnson created his own style by tossing classic recipes and traditional “styles” out the window and developing a new way of cooking. For him, it’s about bringing together the flavors he knows and loves and making it his own — Freestyle BBQ. Throughout his lift, Phil has always been different, and has sought a different path to define success in every part of his life. Through every step he’s taken, he’s learned a valuable life lesson that he can share in a voice that resonates with young people that are faced with struggles. He is proof that living “freestyle” is not only an option, it’s a way to the top.