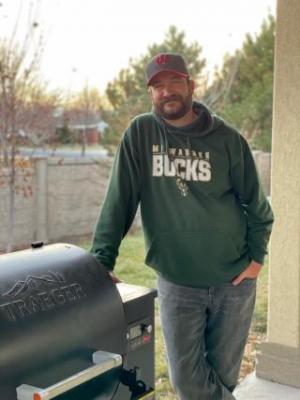 
Ben Holder is an award-winning, self-taught grill master with a passion for BBQ. Originally from Pell Lake Wisconsin, he moved to Utah in his early 20's where he lives today. His BBQ journey started with a small electric smoker that was given to him by a friend (everything cooked on that smoker was awful!). Ten years and many grills/smokers later, Ben has become a true BBQ force. His laidback attitude and bold flavors keep you coming back for friendship and good food. In February 2019, he brought home the 2nd place trophy for chicken at the Home Town BBQ Throwdown in Tucson, Arizona. In May of 2021, he won 1st place for steak in the BBQ Pitstop Steak Championship Series. In June 2021, Ben was awarded the title of Reserve Grand champion in the Warrior Rising Cookoff (chicken, steak, seafood, and dessert). When he is not cooking and staring lovingly at his grills, Ben enjoys playing video games, crushing claws, and spending time with his family.