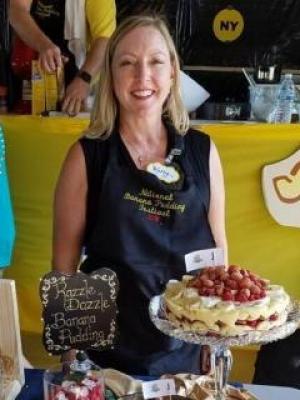 
I am an award winning home cook that started entering online recipe contests in 2015. I just LOVE to create and cook for others! I entered the Gilroy Garlic Festival’s garlic recipe competition in 2016 and I was so honored to hear that my dish was chosen as one of the top 10 finalists. Being my first LIVE on stage competition , I was both thrilled and terrified at the same time. The Garlic Festival puts on an amazing competition. I had no idea how fun it was going to be! I survived and came home with a coveted garlic crown in 3rd place in my first competition. In 2017, I competed in the National Banana Pudding Festival in Tennessee and won 2nd place. And then in 2018 I returned to Tennessee and became the National Banana Pudding Champion, taking 1st place with my razzle dazzle banana pudding. I have had wonderful experiences competing and I am excited to join the WFC in Dallas as a first time competitor!