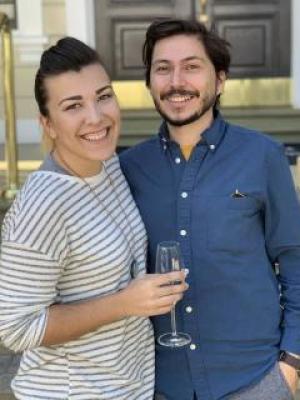 
Let me preface this by saying on the scale of this competition I am a complete amateur. Cooking has always been a passion of mine, when my sisters and I were younger, my mom worked week days so we would often make dinners together. As the middle child I definitely got competitive in the kitchen, but I had never dreamed of competitive cooking until I responded to an ad on Facebook in 2019 for what I thought was simply a recipe submission contest. When I received the information that I qualified, I honestly thought it was a scam. Little did I know I would be flown to two different locations for the semi final and the final, and when it was all said and done I won the first and only competition I had ever been in! My day job is Massage Therapy, so when the lockdown happened in 2020 I suddenly had a lot more time to experiment with recipe development. I found a passion I didn't even know was there! I decided that I would try to food competition world, mostly to prove to myself that my first win wasn't a fluke, that I really am good enough to be up against professional chefs and home cooks alike. My dream is to retire my mom and open up a bed and breakfast with her where I can host private dinners. I'm so honored and excited to be invited to compete at the World Food Championships, and I hope I win!