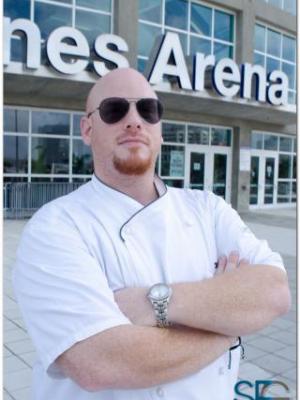 
CHEF MICHAEL B. JACOBS CHEF/OWNER, STRATEGIC HOSPITALITY GROUP, NOODLE STATION, O3 BISTRO AND MBJ HOSPITALITY CONSULTING, INC. A veteran chef of Michelin-starred restaurants, caterer to high-profile celebrity clients and former food-service provider for The Miami Heat, Michael B. Jacobs began his illustrious culinary career at the ripe age of 12 when he joined his father's Boston-based catering company to help cater his own bar mitzvah. He soon fell in love with the cooking world, leading him to enroll in Johnson & Wales University in Rhode Island, where he graduated with honors in 1993. Jacobs apprenticed at the world-famous King David Hotel, Jerusalem as well as under the legendary chef Terrence Brennan of Picholine in New York City, and in some of the world's best kitchens including Auberge du Pont Rouge in Le Mans, France, Bacon in Cap d ’Antibes in southeastern France, Le Gavroche in London, and the world-renowned Ecole Ritz Escoffier in Paris. In the mid-1990s, he helped place South Florida on the national culinary map as executive chef of Tantra Restaurant and Lounge. In 1999 Jacobs accepted the role of executive chef and hospitality director at Ferrell Law, a multinational firm based in Miami, where he created elaborate meals and receptions for Ferrell's roster of attorneys and affluent clients. After more than a decade, he returned to the restaurant industry to become the consulting chef at Grass, a cutting-edge restaurant and lounge in Miami's Design District. In 2009 the NBA Champion Miami Heat called on Chef Michael and was able to cook for them for six seasons, while they won Back-to-Back Championships 2012-2013. Now, arguably the hardest working chef in Miami, Jacobs wears quite a few hats, including caterer to high-profile celebrity clients, running O3 Bistro in Sunny Isles Beach, CEO of Miami’s Strategic Hospitality Group, and partner of both Mama Tried Bar, Miami and Noodle Station in Fort Lauderdale, Florida. Throughout his years as a chef, Jacobs' cooking has garnered praise in a slew of major publications, including Rising Star Chef Restaurant Hospitality Magazine, The New York Times, New York Magazine, New York Post, USA Today, The Miami Herald, South Florida Sun-Sentinel and Ocean Drive, just to name a few.