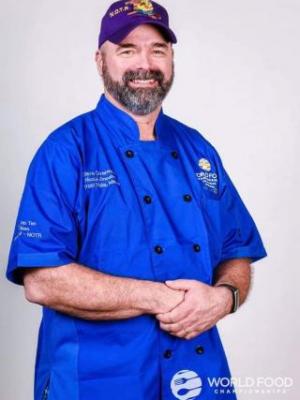 
I have been competing in BBQ competition since June 2014; usually with my youngest daughter as Hoakie Smoakes BBQ. We have won four Taste of America Golden Tickets into the World Food Championships: 2016 Steak Category, 2018 Chicken Category, 2019 Recipe Category & 2021 Seafood Category. In 2015 I teamed up with Dave Adams of G-PA D\'s BBQ. We've had some great successes in BBQ competitions since teaming up; taking: 1st place \"Anything Butt\" with a Steak Oscar (2016) and a 1st Place \"Dutch Oven\" Beef Wellington (2017) at the Montana State BBQ Championship, 1st place Potatoes/Onion Benton/Franklin Fair & Rodeo in Washington (2016), and at Juarez Canyon, Oregon City, Oregon: 1st Place Anything Potato (2019), 1st Place (2016 & 2018) and 2nd Place (2017) in the Chili (People\'s Choice) In 2017 we won Grand Champions of Side Categories at Grand Coulee, Washington. In 2018 I won 1st Place inn the Liberty Mutual Chili Cook-off in Liberty Lake, Washington. In 2016 Dave Adams, as my sous chef, and I first competed in the World Food Championships as Team Hoakie Smoakes in the Steak Category, and we were also the sous chefs for the #3 (Christine James) and #5 (Anthony James) top ten finishers in the 2016 WFC Chili Category. 2017 Dave Adams and I, as the sous chef, returned to the World Food Championships as Team G-Pa D\'s in the Burger Category, and representing the Disabled American Veterans. Known locally at the competition as \"Team DAV\" we spent much of our time promoting awareness to veteran issues such as health care, disability and suicide prevention. In 2018 we again returned to the World Food Championships as Team Hoakie Smoakes in the Chicken Category; once again as "Team DAV" promoting awareness of veteran issues. We finished well in 2018, scoring the highest score of any of the individual chicken dishes, and finishing 4th Place overall in the category. In 2019 I returned to the World Food Championships in the Recipe Category; this time accompanied by my wife "Chef Sherry" and my friend, and former BBQ restaurateur, "Uncle Leroy" Payne as Team Hoakie Smoakes: aka "Team Disabled American Veterans (DAV)" / "Team National Order of Trench Rats." We take great pride in bring awareness to veteran issues, and we regularly volunteer and cook for various veteran functions and annually at Feed the Troops at Fairchild Airforce Base near Spokane, WA; feeding 1,000 - 1,200 service members and base staff. In 2020, the year of COVID closures, I participated in the WFC Food Sports Stimulus program, and I competed, and won 1st place, in the North Idaho Bikers Against Teen Addiction and Abuse soup cookoff. In 2021 I completed in the World Food Championships in Dallas, TX and finished in 12th place in the Seafood Category. My team and I will be returning to Dallas in November 2022 to redeem ourselves in the Seafood Category.