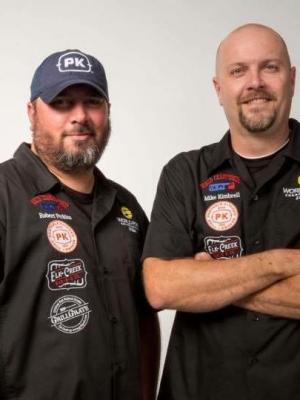 
Bottomland BBQ…it all began in 2016; one small backyard smoker full of ribs, two best friends watching smoke roll out the chimney and shooting the breeze for hours until they had their masterpiece. With encouragement from their families, Robert Perkins and Michael Kimbrell decided to take their “backyard bbq’er” status to a whole new level. They joined the KCBS (Kansas City Barbecue Society) circuit and followed the competitions through 2016. They won Taster’s Choice in Stuttgart, Arkansas which was their very first competition. Needless to say, they were hooked. After competing in multiple BBQ competitions in 2016, the boys wanted to try something a little different, so they looked into the SCA (Steak Cookoffs Assocation) and thought, why not? Their families swear Robert and Michael cook the best steaks in the country. So, 2017 brought on the Steak Competitions. Their very first competition was in Rogers, Arkansas. They won 9th place. It was rewarding and addicting. So, off to competition number two…FORDYCE, ARKANSAS, Fordyce On the Cottonbelt. When they got that 1st place call, it was a feeling no one could ever imagine. THEY WON! They got that GOLDEN TICKET so many others only dream of. Nothing can compare to that moment. Since Fordyce, they have competed in several more SCA competitions and received a few top ten finishes, always looking forward to the next event. FUN FACT: Their grill is a mid-1960’s model PK Grill they pulled from their deer camp. Who knew that long lost grill could create an award-winning steak! Robert and Michael both live in Vilonia, Arkansas with their families. Robert and his wife Katie have twin girls, age 6. Michael and his wife Julie have a daughter age 18, and a son age 14. Their families and friends are their biggest fans!