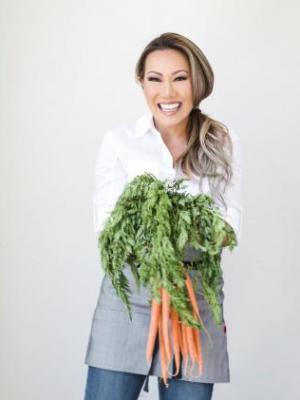 
Chef Annie Smith’s first love was food. It all began with a little peach tree in her backyard to inspire her first homemade pie when she was eight years old. It was a home run and she’s had a passion for cooking ever since. Food has always played a role in Annie’s life, representing family and cultural grounding. Annie’s humble beginnings dates back to Vietnam in the late 1970s when she set sail on a tiny, wooden boat from Saigon for America with her Mother and Aunt at the age of 2. Robbed at sea by pirates, they were lucky to have survived. They spent the next year at a refugee camp in Indonesia where food was a scarce commodity before being sponsored by family to the United States. Fast forward 25 years. Determination and hard work had paid off. Annie was truly living the American Dream. She was at the peak of her career as an executive, built her dream home, and became a mother to a beautiful baby girl. Then, the unimaginable happened. Her daughter was diagnosed with a rare disorder called Rett Syndrome. This disorder would quickly rob her little girl of all of her skills and she would require 24 hour care for the rest of her life. Annie retired and became her full time caregiver and advocate. But her “well” had ran dry. She was heartbroken. But she found life again in the kitchen… and in front of the cameras. Annie has starred in NBC’s Food Fighters, The Tyra Banks Show, Recipe Hunters, Food Network’s Cutthroat Kitchen, and Man vs Master, and United Plates of America. She has proven that she has what it takes by competing and winning against world renowned Chefs. Annie is a contributing writer for Girl Power 2 Cure. Her specialty is “California Asian Fusion”, where bold flavors marry fresh, seasonal, coastal cuisine. Her motto is “Life your life to the absolute fullest.... no matter the cards you’ve been dealt. Actively seek joy. And don’t forget to savor every delicious bite along the way.” ♥️