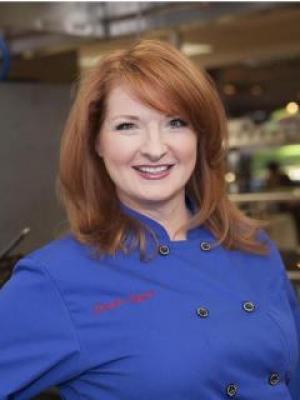 
Jennifer Bajsel, local DFW private chef and owner of the personal chef/boutique catering company Getting Saucy, began her professional cooking career in 2011, as she pursued her professional culinary degree at The International School of Culinary Arts at The Art Institute Dallas. Chef Jennifer is an upstate New York native and has resided in Dallas, TX for 26 years. Her latest culinary venture involves advocating for a better American food system. As a food advocate, Jennifer promotes utilizing organic, non-GMO ingredients from local sustainable farms, and promotes animal and environmental welfare. Chef Bajsel has been working primarily as a private chef for the past 5 years. Not only does the New York native spend time advocating for a better food system but she also volunteers at the North Texas Food Bank, and supports Independence Gardens in Dallas. Jennifer’s upbringing and life experiences have taught her to give back to the community as well. Jennifer has also appeared on two Food Network shows. In 2015 she appeared on Beat Bobby Flay and in January of 2019 she was on “Chopped”. Currently Jennifer has an Italian cooking show in it's 1st season on "Eat This TV" Network.