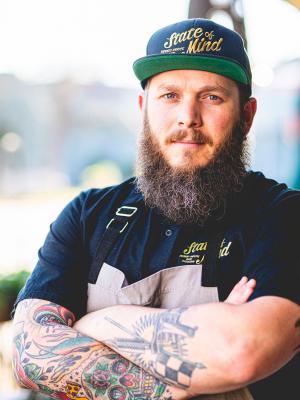 
Lars Smith is the chef and co-owner of state of Mind Public House and Pizzeria in Los Altos, California. He has been in the industry since 2002, but has had a love for food since he was a child. He grew up cooking with his grandmothers, learning as much as he could from them. Lars always dreamed of opening a restaurant with his family. In 2018 that dream was realized when State of Mind Public House and Pizzeria officially opened it doors. At State of Mind, Lars focuses on food made from scratch featuring ingredients from all around California. For Lars, California is more than a place on the map; it is a state of mind. In 2017, he won the international pizza challenge Non-Traditional division in Las Vegas and was featured on the Cooking channel’s “Food Wars”. In 2018 he won second place at the US Pizza team West Coast Cup pan division and first place at the US Pizza team Northeast Pizza Trials traditional competition. In 2019 Lars won the US Pizza Team West Coast Cup and earned a golden ticket to compete at the WFC. Lars continues competing around the country and in Italy and is very excited to compete at the WFC for the first time.