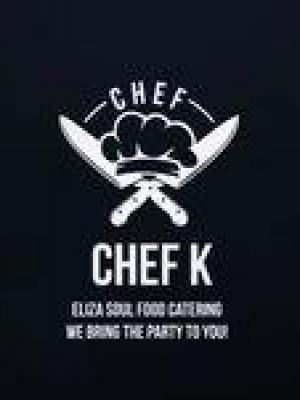 
Chef Linwood Kennedy’s Brief Bio Chef Linwood Kennedy born and raised in Atlanta Georgia where he has the pleasure of being owner of an Atlanta based catering company, Eliza Catering, since 2002. After Completing Culinary School at Le Cordon Bleu. In 2014 Chef Linwood Kennedy moved up the later quickly as Sous Chef for Executive Chef Jernard Wells (2 time Winner on Cutthroat Kitchen) in the mist of all is skills he still have the passion to compete in his first competition as the 2014 Culinary Fight Club Bougie Burger Battle in Atlanta, Georgia. Later in November 2014 he competed in the 2014 World Food Championship Pasta Challenge placing in the top Ten. Also, participation in the Beer Bourbon BBQ Festival Atlanta and New York. In 2017, Chef has the pleasure working with Celebrity Chef Elliott Farmer (winner of Cutthroat Kitchen Season 8) He was Feature in the Country Living Fair Magazine in Stone Mountain, Georgia and Nashville, TN. 2017 Florida Restaurant & Lodging Show. 2017 Taste of Lancaster/ 2017 Taste of Philadelphia. 2018 Bullseye Player Tailgate Superbowl Show down in Atlanta Georgia. In 2019 Chef Kennedy became Chapter President of the National Black Chef Association (NBCA). During his rising fame, he continues to work alongside some prominent chefs. He has developing his special sauce Bourbon BBQ blend. In September 2018 Chef Kennedy Participate at Middle Georgia Community Food Bank where he won the Golden Ticket to the World Food Championship for 2019. In May 2019 Chef Kennedy Competed in the Blended Burger Challenge where he won People Choice Award. Chef Kennedy Competed In the 2019 World Food Championship where he placed in the top 10 Bacon Categories Ranking #6.