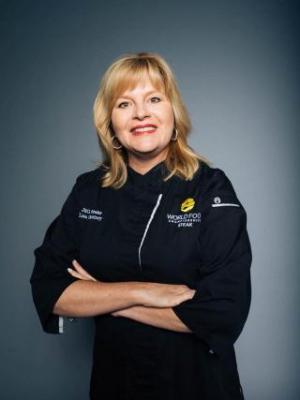 
Lisa Gwatney from Memphis, Tennessee is a self-taught home cook, Mother of 4 wonderful children who are now grown, and a FedEx employee for the past twenty-eight years. But Lisa’s hobby of cooking took an exciting turn when she recently won $100,000 at the biggest food competition in the world, the sixth annual World Food Championships held in Bentonville, Arkansas on April 22, 2018. Her prize winning dish was a Wagyu ribeye seared in butter and finished with an Amarone reduction sauce, topped with truffle butter, sautéed mushrooms, seared Foie Gras, and served with carrots and potatoes galette. Lisa’s remarkable steak recipe wowed the panel of judges made up of Walmart’s Senior Vice President Shawn Baldwin, former pro athlete Bo Jackson, celebrity chef Katie Dixon, venture capitalist Mart Massey and legendary pit-master Moe Cason. Winning the ultimate food fight for this Memphis mom wasn’t about the $100,000 mega prize, but the platform the competition gave her to communicate the strong connection between family, friends and food. “When I compete I always cook like I’m cooking for my family. I want to share the importance of sitting down and having a delicious, homemade meal with the ones you love.” Lisa was raised in an Irish/Italian family and grew up on a farm outside of Ann Arbor, Michigan. Her husband Russell, is a car dealer and a seasoned food competitor who won the World Championship in BBQ for Whole Hog in 2005 and has also won the Tennessee State Championship for ribs. When the two became empty nesters, Lisa started focusing on perfecting her culinary hobby along with her husband. Cooking is something Lisa and Russell enjoyed doing together and competing was a great way to spend a weekend with fellow friends and competitive cooks. This included entering the largest food competition on the planet – The World Food Championships. Nervous and intimidated, Lisa almost didn’t compete. That would have been a big mistake because Lisa was able to go head-to-head with hundreds of professional chefs, home cooks, food bloggers and restaurant owners- beating them all and taking home six figures. Natural, locally sourced products that are healthy and flavorful is more Lisa’s style of cooking. Nothing fussy or perfect, just super yummy meals with the people she loves the most. Lisa says, “This is what life is all about.”